The National Museum of the American Indian in Washington, DC, reopens May 21. Required timed-entry passes will be available starting May 14. The museum in New York, NY, remains closed.

DONATE
Home | Lessons & Resources | The Removal of the Muscogee Nation

The Removal of the Muscogee Nation

The Muscogee (Creek) Nation was one of many American Indian Nations to lose its lands to the United States. This interactive uses primary sources, quotes, images, animations, and short videos of contemporary Muscogee people to tell the story of the Muscogee Nation's experience before, during, and after removal. Explore this resource to increase understanding of the effects of removal on Native people and nations. 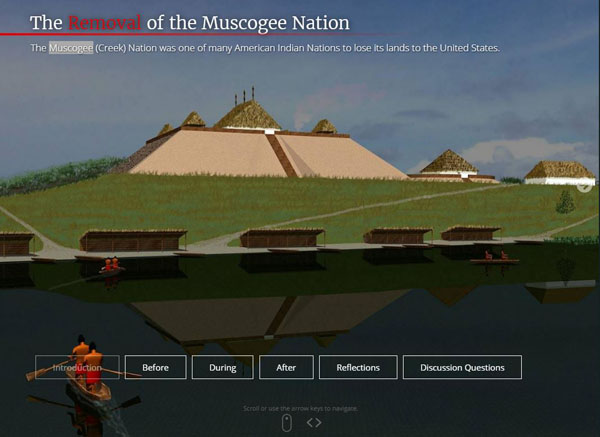 3: People, Places, and Environments
Throughout their histories, Native groups have relocated and successfully adapted to new places and environments.

5: Individuals, Groups, and Institutions
External educational, governmental, and religious institutions have exerted major influences on American Indian individuals, groups, and institutions. Native people have fought to counter these pressures and have adapted to them when necessary. Many Native institutions today are mixtures of Native and Western constructs, reflecting external influence and Native adaptation.

6: Power, Authority, and Governance
A variety of political, economic, legal, military, and social policies were used by Europeans and Americans to remove and relocate American Indians and to destroy their cultures. U.S. policies regarding American Indians were the result of major national debate. Many of these policies had a devastating effect on established American Indian governing principles and systems. Other policies sought to strengthen and restore tribal self-government. A variety of historical policy periods have had a major impact on American Indian peoples' abilities to self-govern.

D2.Geo.6.6-8
Explain how physical and human characteristics of places and regions are connected to human identities and cultures.

D2.His.3.6-8
Use questions generated about individuals and groups to analyze why they, and the developments they shaped, are seen as historically significant.

D3.1.6-8
Gather relevant information from multiple sources while using the origin, authority, structure, context, and corroborative value of the sources to guide the selection.

CSSS.ELA-LITERACY.CCRA.SL.2
Integrate and evaluate information presented in diverse media and formats, including visually, quantitatively, and orally.

Geography Standard 9
The characteristics, distribution, and migration pattern of human populations on Earth's surface.
3. Migration: There are multiple causes and effects of migration.

Geography Standard 13
How the forces of cooperation and conflict among people influence the division and control of the Earth's surface.
2. Cooperation: Countries and organizations cooperate through treaties, laws, and agreements to manage resources, maintain the environment, and mediate disputes.
3. There are multiple sources of conflict resulting from the Earth's surface.

Geography Standard 17
How to apply geography to interpret the past.
1. Using Geography to Interpret the Past: A historical event is influenced by the geographic context (human and physical characteristics of places and environments) in which it occurred.
3. Perceptions of Geographic Contexts: Historical events were influenced by people's percpetions of places, regions, and environments. 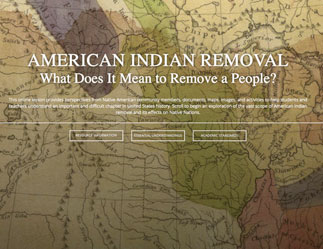 digital lesson
American Indian Removal: What Does it Mean to Remove a People? 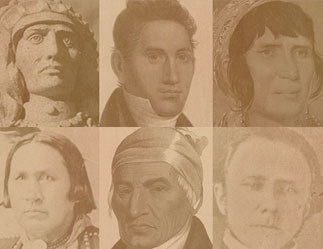 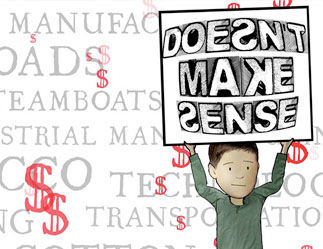