The Repatriation Department is located at the museum's Cultural Resources Center (CRC) in Suitland, Maryland.

To ensure a timely response, please email a copy of any USPS correspondence to Repatriation to nmai-repatriation@si.edu.

A Step-by-Step Guide through the Repatriation Process

NMAI Repatriation in the Media

Objects that, as a part of the death rite or ceremony of a culture, are reasonably believed to have been placed with individual human remains either at the time of death or later, and both the human remains and associated funerary objects are presently in the possession or control of the NMAI.

A relationship of shared group identity that can be reasonably traced historically or prehistorically between a present-day Indian Tribe or Native Hawaiian Organization and identifiable earlier group.

To remove an object from a collection; at the NMAI this is done only through action of the NMAI Board of Trustees.

American Indian communities with a government-to-government relationship with the United States as established by the Bureau of Indian Affairs and its Office of Federal Acknowledgment.

Human remains mean the physical remains of a human body, or any part thereof, whether or not naturally shed, freely given, or culturally modified. In some contexts, human hair may be considered human remains. For purposes of this policy, it is assumed that all human remains in the collection are of Native American ancestry unless otherwise known.

Any materials acquired by or transferred to the NMAI illegally or under circumstances that render invalid the museum's claim to them.

Any tribe, band, nation, or other organized group or community of Indians, including any Alaska Native village or regional corporation (as defined in, or established pursuant to, the Alaska Native Claims Settlement Act), which is recognized as eligible for the special programs and services provided by the United States to Indians because of their status as Indians.

An individual tracing his/her ancestry directly and without interruption by means of the traditional kinship system of the appropriate Indian Tribe or Native Hawaiian Organization or by the common law system of descent to a known Native American individual whose remains, funerary objects, or sacred objects are being claimed.

Members or descendants of the aboriginal people who before 1778 occupied and exercised sovereignty in what is now the State of Hawai'i.

NMAI Board of Trustees

The Board of Trustees has the sole authority within the NMAI to deaccession items. They are also subject to the general policies of the SI Board of Regents (see Section 5(c)(1) of the NMAI Act).

Objects that, as a part of the death rite or ceremony of a culture, are reasonably believed to have been placed with individual human remains either at the time of death or later, and the human remains are not in the possession or control of the NMAI or Smithsonian Institution. 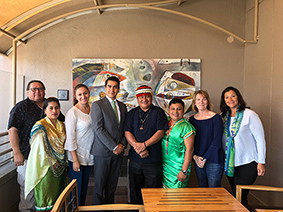 Repatriation consultation with representatives from Chachi Federation, National Confederation of Indigenous Peoples of Ecuador (CONAIE), and Ministry of Culture and Patrimony of Ecuador (MCP), Ecuador, 2018. 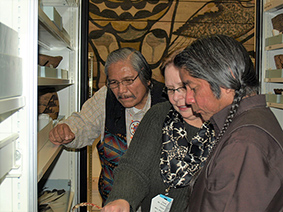 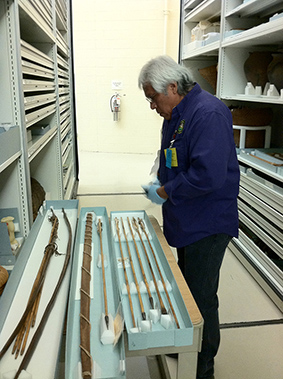