Due to Covid-19 restrictions, the museum is experiencing delays receiving USPS mail. To ensure a timely response, please email a copy of any USPS correspondence to Repatriation to nmai-repatriation@si.edu.

What is Repatriation?
Repatriation is the process whereby human remains and certain types of cultural items are returned to lineal descendants, Indian tribes, and Native Hawaiian organizations.

The policy discusses the categories eligible for repatriation, cultural affiliation, eligible claimants, burden of proof, appeals process, access to sensitive information, and steps in the repatriation process. It includes several sections that go above and beyond the law, such as expanded definitions of Human Remains, Funerary Objects, and Sacred Objects and the inclusion of repatriation provisions for culturally unaffiliated and culturally unknown Human Remains and Associated Funerary Objects.

At the NMAI, the following are categories eligible for repatriation:

The NMAI Repatriation Policy also includes repatriation provisions for Indigenous communities outside the United States. While not required by law, in the spirit of the domestic legislation and in accordance with its mission and recognition of the United Nations Declaration on the Rights of Indigenous Peoples, the NMAI will consider such repatriation requests on a case-by-case basis. These considerations are guided by the policy. 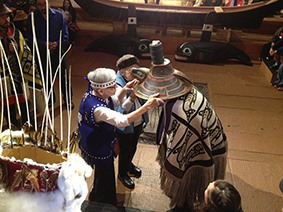 Tlingit Marmot hat in ceremonial use after repatriation from the NMAI, 2013. Photo courtesy of Harold Jacobs. 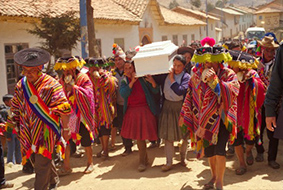 Procession during repatriation to the Quechua Community of Cuzco, Peru, 1996. 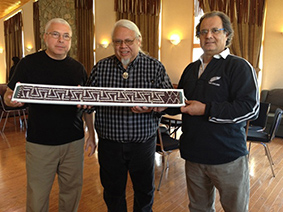