To highlight the creative work of talented Native Americans in film and offer the public insight into contemporary issues and ways of life in Native communities, the National Museum of the American Indian in Washington, D.C., and New York City screens feature films, documentaries, experimental films, and short works by indigenous and independent filmmakers. Fictional films shown by the museum represent multiple filmmaking styles and tell diverse Native stories. Documentary programs focus on important themes such as climate change, land rights and sovereignty, and the preservation of indigenous language and cultural traditions. Directors, actors, or community members are often present after screenings to discuss their work with the audience.

Film Festivals
The biennial Native American Film + Video Festival, produced and hosted by the Film & Video Center in New York from 1979 to 2011, provided a forum for Native media and media makers from throughout the Western Hemisphere and played a key part in the development of the museum. Festival programs, including descriptions of the films shown, are available on the Festival page.

The museum’s Native Cinema Showcase—founded in 2000 as a partnership with the Center for Contemporary Arts, now continuing with the Southwestern Association for Indian Arts (SWAIA)—brings Native films and filmmakers to Santa Fe’s Indian Market in August. Explore previous Native Cinema Showcase programs: 2018, 2017, 2016, 2015, 2014. The Film & Video Center presents the annual Animation Celebration! each winter. In both New York and Washington, the museum produces or takes part in festivals and other events screening new or important works; examples include the Pacifika Showcase in New York, the annual Environmental Film Festival in the Nation’s Capital, and First Nations | First Features: A Showcase of World Indigenous Cinema in New York and Washington, D.C. The NMAI also gives in-depth programming support to other film festivals and cultural organizations, such as the Agua Caliente Cultural Museum’s Native FilmFest in Palm Springs and Arizona State Museum’s Native Eyes Film Festival in Tucson.

Submitting Your Film
The museum seeks new films by and about the Native and indigenous communities of the Western Hemisphere. The NMAI looks for challenging, thoughtful, passionate presentations of contemporary Native perspectives, and welcomes new works on current and relevant topics. Films by young and emerging media makers and by community-based production programs are of particular interest. To submit a film for consideration for an upcoming NMAI program, download and complete a preview form (English or Spanish) and mail it with a DVD copy of the film to either or both of the addresses at the top right of this page. For more information, or to submit a film to the NMAI digitally, email fvc@si.edu.

Research and Media Study
The museum’s staff offers information services to researchers, educators, filmmakers, film programmers, and the general public on site or by email or phone via the contact information above. Native Media Topics is an online resource on contemporary Native media throughout the Americas.

Film, video, and radio productions are available for research and study at the National Museum of the American Indian in New York. The museum’s two-volume catalog, Native Americans on Film and Video, describes more than 600 earlier films and videotapes. For information on a particular title or subject, please contact us to find out what is available. Advanced notice is required for film viewing. For an appointment, email fvc@si.edu or call 212-514-3733. 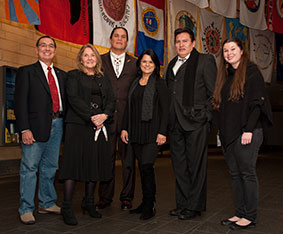 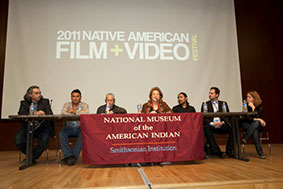 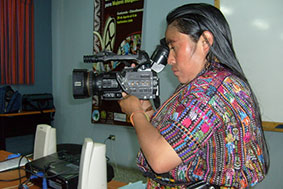 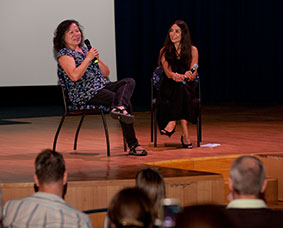 Filmmaker Shelley Niro (Mohawk) and moderator Yvonne Russo (Sicangu Lakota) talking with the audience after a screening of Kissed by Lightning. Dinner & a Movie, National Museum of the American Indian, Washington, DC, July 2011.