T.C. Cannon: At the Edge of America

One of the most influential, innovative, and talented Native American artists of the 20th-century, T.C. Cannon embodied the activism, cultural transition and creative expression that defined America in the 1960s and 1970s. Cannon’s work—as an artist, poet, and aspiring musician—is deeply personal yet undeniably political, reflecting his cultural heritage, experience as a Vietnam War veteran, and the turbulent social and political period during which he worked. Cannon preferred bold color combinations, mash-ups between Native and non-Native elements and never shied away from the complexity and nuance of identity politics. Cannon interrogated American history and popular culture through his Native lens, and exercised a rigorous mastery of Western art historical tropes while creating an entirely fresh visual vocabulary. T.C. Cannon: At the Edge of America celebrates Cannon’s creative range and artistic legacy through numerous paintings and works on paper, as well as his poetry and music.

The National Museum of the American Indian is pleased to present T.C. Cannon: At the Edge of America, an exhibition organized by the Peabody Essex Museum, Salem, Massachusetts. The exhibition was made possible by an award from the National Endowment for the Arts. All works in the exhibition are by T.C. Cannon unless otherwise mentioned. This exhibition would not have been possible without the support of Joyce Cannon Yi, executor of the Estate of T.C. Cannon. Carolyn and Peter S. Lynch and The Lynch Foundation, and Ellen and Steve Hoffman provided generous support. We also recognize the generosity of the East India Marine Associates of the Peabody Essex Museum. The New York presentation of this exhibition and related programming is made possible through the generous support of The Nathan Cummings Foundation and Ameriprise Financial. 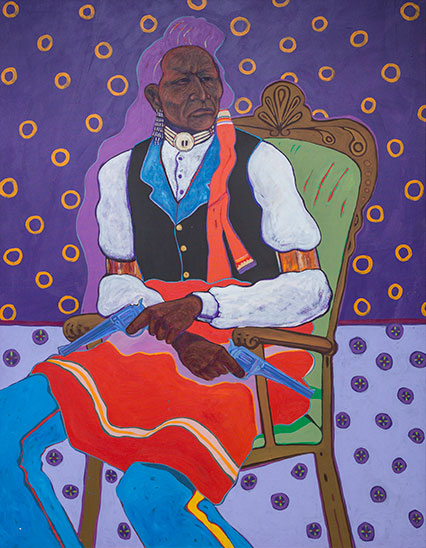