A Song for the Horse Nation, DC

Through an array of 122 historic objects, artwork, photographs, songs, and personal accounts, A Song for the Horse Nation presents the epic story of the horse's influence on American Indian tribes, beginning with the return of horses to the Western Hemisphere by Christopher Columbus to the present day. The exhibition traces how horses changed the lives of Native people: from the way they traveled, hunted, and waged war to how they celebrated generosity, exhibited bravery and conducted ceremonies. It shows how horse trading among tribes was the conduit for the extensive spread of mustangs in the Plains and Plateau regions of the United States, as well as how horses became the inspiration for new artistic expressions and rich traditions that continue to this day.

This critically acclaimed exhibition first opened at the museum's George Gustav Heye Center in New York on November 14, 2009, and was on display until July 10, 2011. The Washington version doubles its exhibition space to 9,500 square feet and features 15 new objects, including a hand-painted, 19th-century Sioux tipi depicting battle and horse raiding scenes. Other highlights include a life-size horse-mannequin in spectacular, fully beaded regalia and Geronimo’s and Chief Joseph’s rifles. 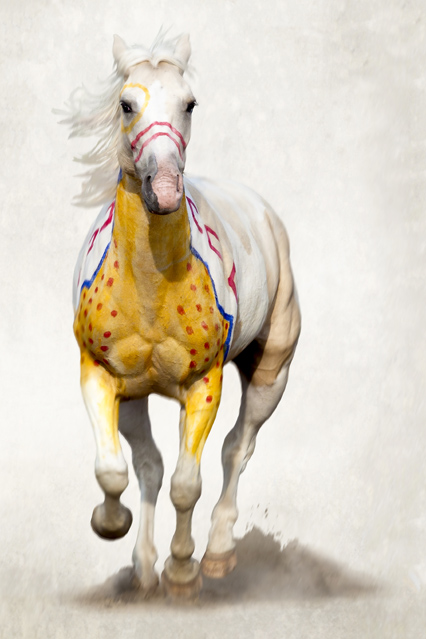 Crow War Pony–1, Fine Art Photography by Brady Willette; pony painting by Kennard Real Bird (Crow). Collection of the National Museum of the American Indian.
Drawing upon the museum's collection of stunning objects and vivid personal accounts, the Smithsonian's National Museum of the American Indian in Washington, DC opened a major exhibition, "A Song for the Horse Nation," on Saturday, October 29, 2011.