In the late summer of 1862, a war raged across southern Minnesota between Dakota akicitas (warriors) and the U.S. military and immigrant settlers. In the end, hundreds were dead and thousands more would lose their homes forever. On December 26, 1862, 38 Dakota men were hung in Mankato, Minnesota, by order of President Abraham Lincoln. This remains the largest mass execution in United States history. The bloodshed of 1862 and its aftermath left deep wounds that have yet to heal. What happened 150 years ago continues to matter today.

This exhibition is on view at the National Museum of the American Indian in Washington, D.C., January 12–December 29, 2015. 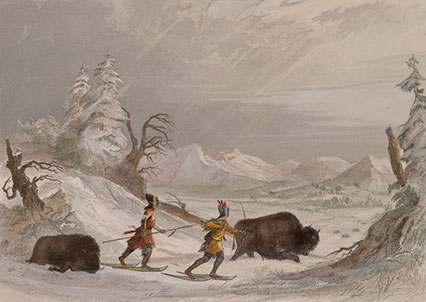 Seth Eastman (1808–1875), Hunting the Buffalo in Winter. Plate 10, printed by R. Hinshelwood. From the collections of the Nicollet County Historical Society.