A Century Ago: They Came as Sovereign Leaders

This small photo exhibition focuses on President Theodore Roosevelt's 1905 inaugural parade and the six great chiefs who participated in the parade arriving with their own purposes in mind, representing the needs of their people. The chiefs included Buckskin Charlie (Ute), American Horse (Oglala Sioux), Quanah Parker (Comanche), Geronimo (Chiricahua Apache), Hollow Horn Bear (Brule Sioux) and Little Plume (Piegan Blackfeet). The exhibition goes beyond the intent of President Roosevelt's inaugural committee, which was to add color to the show. The six Native leaders had their own questions and actively sought President Roosevelt's attention to their concerns.

This exhibition was also on view at the National Museum of the American Indian in Washington, D.C., January 14–February 18, 2009. 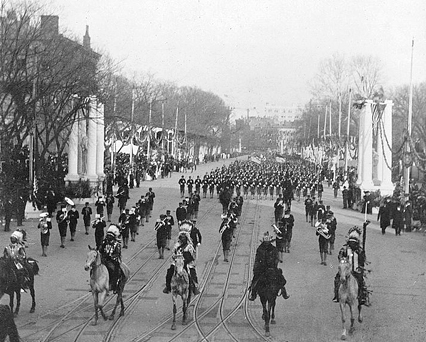