During the course of the five-year Move Project, NMAI moved more than 800,000 Native American archaeological (607,089) and ethnographic (168,622) objects from the NMAI Research Branch, a crowded warehouse in the Bronx, New York, to the museum's Cultural Resources Center, a purpose-built research and storage facility in Suitland, Maryland. For the duration of the project, a truckload of objects was shipped between the two facilities almost every week. Over the course of the project, one hundred and seventy-seven people participated in the project: 140 staff members and contractors, 25 volunteers, and 12 interns. The project was completed in June 2004.

Registration, Conservation, Photography, and Collections Management staff coordinated efforts to prepare objects to travel from the Research Branch and to receive and rehouse them in Maryland. Many long-term benefits were realized: every object was cleaned and, if necessary, stabilized. High-resolution digital photographs were taken of each object as part of the Move Project. These images, in addition to assisting in the move, have helped increase access to the collection, while minimizing the need for increased handling in the future. The Move Project also served as an impetus to upgrade the museum's system for tracking individual objects and facilitated reconciliation of registration and inventory problems.

The Move Project represented an important turning point in the history of the NMAI collection. George Gustav Heye, founder of the Museum of the American Indian–Heye Foundation, built the Research Branch specifically to house his Native American collections. For eighty years, the Research Branch served a community of scholars who sorted through textiles, ceramics, beadwork, and the many other objects in Heye's richly varied collection. The facility preserved the collection relatively effectively, despite the limitations of early 20th-century museology. The collection's new home in the Cultural Resources Center is designed to provide for better long-term care of the objects and to enhance accessibility of the entire collection to NMAI's Native and non-Native constituencies.

Follow the Object tracks one object from the NMAI collection throughout each step of the entire process of moving the collection from storage in the Bronx, New York, to the museum’s new facility in Suitland, Maryland. The 26-minute video illustrates the overall move process, and highlights techniques and procedures developed and refined for the project.The video also shows how coordination and collaboration between staff members enabled NMAI to move its collections safely. 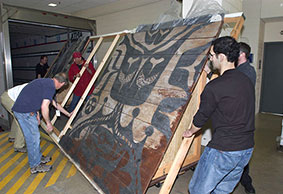 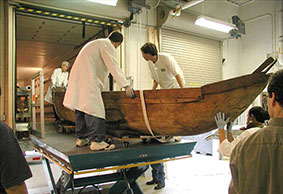