History of the Collections

The NMAI’s current holdings have their foundation in the collection of the former Museum of the American Indian (MAI), Heye Foundation, of New York City, assembled largely by George Gustav Heye (1874–1957). From his first acquisition, the 1897 purchase of a Navajo hide shirt in Arizona, Heye’s collecting quickly expanded into archaeological material. By 1903, he was buying large archaeological collections from around the hemisphere, and by 1906, he had accumulated more than 10,000 objects. Based in New York, Heye bought collections and documentary photographs, sponsored expeditions, and traveled and collected items himself. The collection’s rapid growth—and the directions it took—were directly influenced by those he called upon to help him, including Marshall Saville at Columbia University and George Pepper of New York’s American Museum of Natural History. In 1904, Heye initiated a collections catalog on 3- by 5-inch cards, marking the beginnings of his museum idea and systematic collecting and documentation for that purpose. (Although Heye and others founded the museum in 1916, he began soliciting support from affluent friends at least ten years before.) With his mother’s support, Heye funded important excavations in Mexico and Ecuador in 1906, the beginning of a long-term Latin American research plan laid out by Marshall Saville and undertaken long before the museum became reality. Here, Heye’s support for systematic Latin American research predated the American Anthropological Association’s 1907 identification of the region as a priority. By 1908, having filled his New York apartment and a nearby warehouse, he made arrangements with the University of Pennsylvania’s University Museum to exhibit his collection and assembled his own staff to continue to build and care for it.

Although anthropology’s complete mid twentieth-century transition from museums to universities is now seen as a matter of course, it could not have been foreseen when Heye began planning his museum. American archaeology was particularly important to anthropology’s growth, but was largely replaced by increasing emphasis on salvage ethnography and western civilization’s origins in the Middle East. At the University Museum and the American Museum of Natural History—which Heye may have considered museum models—American archaeology was increasingly marginalized. Although the Smithsonian Institution and Harvard’s Peabody Museum of Archaeology and Ethnology retained strong archaeological programs, New York institutions did not serve Heye’s interest in archaeology. Simultaneously, museums began to move from research toward public education, often collecting to develop exhibits rather than pursue science. By contrast, Heye’s interests were specifically New York, adult education, and anthropological study of American Indians.

In 1916, with the collection totaling 58,000 objects, Heye was offered a building site at 155th and Broadway in New York in a new complex of cultural organizations. Supported by affluent friends, the Museum of the American Indian was built. Heye deeded his entire collection to it, endowed the museum, and was named Director for Life. The museum’s official opening—delayed by WWI—occurred in 1922. By signing the 1916 trust agreement and transferring his collections, Heye created “a museum for the collection, preservation, study, and exhibition of all things connected with the anthropology of the aboriginal people of the North, Central, and South Americas, and containing objects of artistic, historic, literary, and scientific interest.” Founding documents placed great emphasis on systematic collecting and scholarly purpose: the “sole aim is to gather and to preserve… everything useful in illustrating and elucidating the anthropology of the aborigines of the Western Hemisphere, and to disseminate by means of its publications the knowledge thereby gained.” Purchase or donation of other collections were justified as valuable to the scientific strengths of the collection, bringing together “specimens that have never been duplicated,” and special emphasis was placed on organic items preserved in caves or in sacred bundles.

Although Heye’s purpose in founding the Museum of the American Indian has often been dismissed as the work of a passionate collector whose only interest was in accumulating objects for the sake of possessing them, the museum’s mission, support by philanthropists, and intensive research and scholarly productivity place it firmly within the scope and scale of other major museums operating during that period. After the museum’s opening, Heye built a professional staff and continued collecting aggressively, and by 1926 had filled his museum and built a separate storage facility in the Bronx. In addition to expeditions and excavations, Heye’s resources allowed him to secure important Latin American archaeological pieces and early North American ethnographic objects from European collectors and museums. However, with the loss of two major benefactors in 1928, Heye lost the backing that made much of his collecting possible, and after the Depression, focused more on buying individual items, often from dealers, and collections assembled by others, often without sufficient documentation. Having accumulated more than 163,000 objects by 1929, Heye continued to build the collections, albeit more slowly, until his death in 1957, at which point they numbered over 225,000 catalog numbers representing perhaps 700,000 individual items. (These represent approximately 85 percent of the NMAI’s current object holdings.)

In 1960, Fredrick J. Dockstader, who had joined the staff in 1955, became the MAI’s director. Following trends begun during Heye’s lifetime, Dockstader acquired significant materials that represented the blending of Native and non-Native worlds, including works made for sale but still representing traditional cultural values. Through purchases and exchanges, Dockstader also acquired important ethnographic and archaeological pieces, reorganized the exhibits, and published a series of books on the collections. Despite this, Dockstader’s later tenure was marked by questions about his efforts to “refine” the collections through deaccessions and collections sales, many of which supported acquisitions between 1960 and 1975, totaling approximately 25,000 objects.

From Dockstader’s departure through director Roland Force’s directorship, much of the museum’s resources were taken up with court-ordered inventories, continued financial struggles, and attempts to resolve the museum’s future. Additions to the collection were limited, numbering fewer than 4000 items. However, during this period, the museum made important programmatic steps by engaging with contemporary Native artists and communities, initiating its Native American Film and Video Festival in 1979 (one of the country’s longest-running Native film festivals), and increasing public programming through contacts with Native individuals and communities.

The Museum of the American Indian’s 1989 transfer to the Smithsonian Institution and creation of the National Museum of the American Indian brought substantial changes to all aspects of the museum. In addition to updating collections management and other operations, attitudes toward the collections changed. Where the collection had served George Heye’s mission—“the preservation of everything pertaining to our American tribes”—the NMAI’s mission, with its emphasis on partnership with Native people and their contemporary lives, has spurred different collections-development strategies and programmatic efforts as well as consultations with community representatives on appropriate standards of care, modes of exhibition and interpretation, and the museum’s overall operations. The NMAI’s most visible achievements have been the opening of the George Gustav Heye Center in New York City in 1994 and the NMAI building on the National Mall in Washington, D.C., in 2004; construction of the NMAI’s Cultural Resources Center in Suitland, Maryland, in 1999; and the subsequent move of the collections from the “Research Branch” in the Bronx, which gave the collections the home they deserved.

The Cultural Resources Center (CRC), designed with Native input and cultural considerations to be the home of the collections, remains a focal point for many of the NMAI’s Native constituents. As a public institution that holds part of the Smithsonian’s National Collections, the NMAI takes its role very seriously, especially in terms of providing stewardship—dutiful care of what essentially belongs to others—for objects that represent collective Native heritage. In preparation for the collections’ move from New York, tribal representatives reviewed regional collections to provide guidance on appropriate preparation of the collections, their transport, and segregation of sensitive materials and special handling, both during the move and at the CRC. Organization of the collections at CRC according to tribal origins—rather than physical type, such as textiles or baskets—allows tribal visitors rapid visual and physical access to their cultural holdings, and sensitive materials are physically separated from objects of daily life, thus allowing visitors to work with collections without risk of encountering sensitive collections. Through NMAI research, exhibit preparation, visiting artists’ programs, and other work, the museum constantly hosts Native and non-Native scholars and researchers whose continued responses to the collections contribute to their better understanding. These and other contacts, as well as the NMAI’s increasing public visibility, have also brought about expanded opportunities for building and diversifying the collections in line with the NMAI’s mission as well as new directions for interpretive uses of the collections by the NMAI and others. Since the MAI’s transfer to the Smithsonian in 1989 and the inculcation of different attitudes about the collections, the NMAI has made great strides in continuing to build the collection through donations, purchases, and commissions, averaging at least 1000 pieces per year and emphasizing modern and contemporary arts.

For more information about George G. Heye, please visit the Smithsonian Magazine site to view an article about Heye by Secretary of the Smithsonian Institution Lawrence M. Small, in the November 2000 issue. 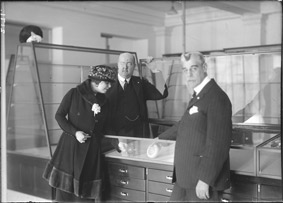 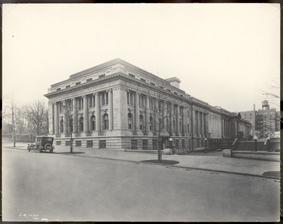 The Museum of the American Indian, Heye Foundation, 155th and Broadway, New York, from the northwest, showing the southeastern portion of the Audubon Terrace complex, 1921. (P02982) 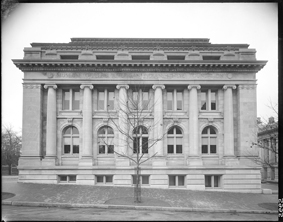 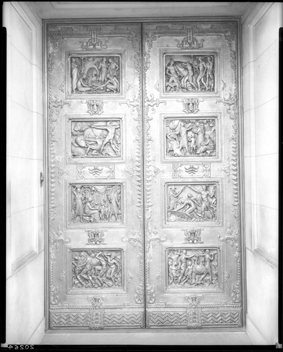 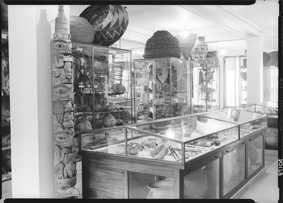 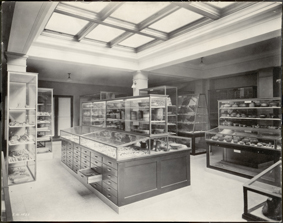